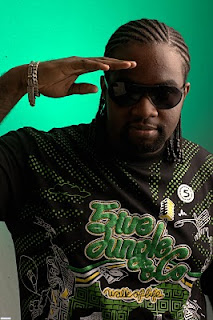 How do you write about someone who has a better way with words than you do? I wanna write about a young man who I honestly believe is a lyrical genius. I've written this article over and over... in my head offcourse and even now as I type I'm not sure i can adequately pass the message across. I lack the words to adequately describe this young man whose wit, humour, savvy and sarcasm caught my attention.

His name is Afolabi Durotoye. Some people know him as Beazy, I just think of him as a breath of fresh air in the cloudy world of music lyrics in Nigeria.

I read about Beazy for the first time in February 2010, I started following him on Twitter 'cos I noticed his comebacks were hilarious. I would read a tweet from Beazy and I would either start laughing crazily, or I'd have a goofy smile on my face.At other times, I'd read something so serious and so in your face "I -Don't-Care-What-You-Think-Of-Me" and I'd just go.. 'oh no.. this boy will get beaten because of Twitter ooo' but you see that's the thing about him.. He is a smart young man who's not afraid to speak the truth as it is.. no bullsh*tting!

With three (3) mixtapes released and over two hundred (200) songs recorded under his belt, i think it's safe to say Beazy is a rapper who knows what he has a passion for and is not afraid to make it work. He is consistent and hardworking. Beazy, eats, drinks and lives his music. He is constantly reinventing himself and is not afraid to take criticism. When you listen to something and you are tempted to place him in a box, you hear something else and say.."that's different!!!!"


I've listened to all 3 mixtapes an uncountable number of times and I can tell you, Afolabi's lyrics make a lot of sense and half the time I'm laughing 'cos I can just imagine what may have inspired some of those lyrics. Time and time again I try to tell myself I have a favorite track on each of the mixtapes and i have failed. Why? because on each mixtape, there is something different. Now this is not to say that he is an unfocused guy who lacks clarity in the quality of his work.. no.. this is clearly an evidence of versatility. His lyrics rhyme and make sense, this is not something we have seen too much of in recent times.

I wondered about how this guy was going to successfully break into the music industry in this country.. I mean if you know Nigerian music, you'd agree with me that we are being dished with a whole lot of crap.. words like "ginger, swagger, sanbaribobo, utunu,f,fff.jgkegfh dsam.fw" ( no that last one was not a typo.. that's my way of saying a hot load of crap) . I wondered, how long it would take him to break even, because while we all go to our day jobs and make money...music is a lot harder to convert into money..especially when you are new in the game. you see, the music 'business' is like oil prospecting, you have to invest a lot of money before you strike a commercially productive/ viable well. It's a lot of hard work and the reason why we have a lot of crappy music out there is primarily because a lot of people think that music is a shortcut to success.. I mean.. you flunking at school? No problem go and sing or go and rap!!! I mean, how else can we explain having so much crap out there?

I respect artistes who make sense, because for me, music is not just about the beat and the hype, it must have meaning, inspire or at least make me laugh.. brighten my mood
I believe that not to long from now, Beazy will become a personification of Good Music that comes out of Nigeria. I also believe that he will be smiling to the bank in due course.. because in the words of Oladele "Music na work o, no be joke oh, my pikin go wear clot, den go go school.. so spray me money".

"Beazy can not only hold his own, but is out to get theirs as well" so I will confidently say in that time.. that "I backed the winning horse" He'll 'program' dem

He has a standard bio online what i'd like to call his "Afolabi Durotoye, born in Jos to Akin and Abake Durotoye bio) so if you'd like to read about him just Google Afolabi 'Beazy' Durotoye.
Posted by Eknoreda at 5:01 PM