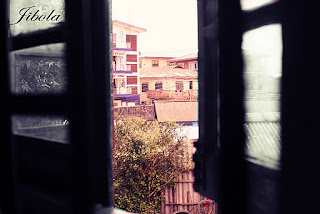 It all started the day my mother asked us to start calling Aunty Toun “Mummy wa” I grew up knowing Aunty Toun as the lady who lived in the nice house in our area. Her house was the only “nice” house there anyway she lived alone and had nice looking cars always driving in and out of her house. Her car was the first one I ever entered and I remember touching the smooth leather seats throughout the ride to the market. My mother did some work for aunty, that’s a dignified way of saying she ran errands for her and in exchange for her services she got a little money, some raw food and with that she ensured that my little sister and I didn’t starve.
You see Aunty Toun is actually my father’s second cousin, but since we never knew our dad, my mother felt it was important to know some of his relatives. Aunty Toun was much younger than my mother but culture demanded she respected her so she was “Sisi Mi Toun” I didn’t understand why my mother was always deferring to her, was is it because she had a lot of money? Surely money was an important thing to have then. It commanded respect.
“Damilola, please go and wear your white dress and white socks, you know Aunty Toun doesn’t like it when you don’t dress well to her house”
Aunty Toun determined what we ate in our little room, what kind of clothes we wore and every other thing. I grew up resenting her and her condescending tone and little gifts.
“Dami and Ife come and say thank you to Aunty Toun. She has just given me your school fees for next term”
With every act of subservience by my mother my head spun, surely I had to do something to liberate my mother from this modern day slavery. When my mother said we should only call aunty “mummy wa” I made up my mind to stop collecting the presents from Aunty, I was going to make money for us.
I was 17 when I got the job at the petrol station and even though the pay was small, I took every kobo I made home to my mother. I would spend the time behind the till reading every scrap of information I could. My personal mantra was “Ignorance led to poverty” I was not going to be ignorant as ignorance led my mother to getting pregnant for a low life who claimed he was from the prominent Lagos Kuku family, when in fact he was actually their cook. Ignorance made her stick around him long enough to have even another baby and then he skipped town leaving her with two children and a false belief in a name.
So when Michael walked into the Mart to ask to buy lubricant for his SUV and showed more interest in me than in the lubricant he came to purchase I strengthened my resolve not to let any man lead me through ignorance to poverty. Something was different about him though, he was persistent and genuinely seemed to care. He was stung when I refused his tip the first time, “I don’t take hand outs sir; I like to earn my own money”. He seemed shocked that I could speak English properly, and for that we could only thank Aunty Toun the benefactor who ensured that my mother sent us to the best primary school in the area. He started bringing books for me to read and kept asking me to consider leaving work for school. I didn’t want to go to school, school would come later, but I surely didn’t want my sister to be raised with mummy wa’s money.
Michael became my friend and never stopped talking about my going back to school. I grew to trust him and look forward to his visits every evening. Then one day he said he was going back to America for his MBA.
“Dami, I want you to marry me. I want you to come with me to the U.S. We can build a life together there. You can go to school there and send for your Mom and sister later. I love you and I would love you for the rest of our lives”
That was five years ago. Today I’m standing at the window looking at mummy wa’s house and thinking life isn’t as dramatic as I pictured it to be. If this was a movie script I wasn’t supposed to be back here thinking of the morning I left Gary Indiana. I had become a captive in a place I had once called home, a battered captive; so I took my children and ran. It had been raining and I felt it was some deity giving his blessing for my actions. I had talked to some women about it “Ehn, he slapped you, and you still stayed there. Do you want to wait till you’re killed?”
“I can take anything oh, but that beating... no no no! My parents didn’t beat me it’s now a man that will make me his punching bag. Mba”
“My sister, you are strong sha o. The day Makinde raises his hand to even try it is the day I will go back home”
I was ashamed. I was living my mother’s life all over again, only this time I had armed myself with an education and I had saved enough money to start all over. I was strong and determined to try again. My children were only going to call one woman "Mummy wa" and that woman was me.
Posted by Eknoreda at 10:43 AM 3 comments:

What I've been up to


Enjoy
Posted by Eknoreda at 9:43 AM No comments:

I haven't abandoned my blog oh, and no I'm not going to give you the tale of how I've been busy blah blah blah.. nehhh... I've just not been able to put my blog post thoughts together.
Last sunday I poured my heart out on my phone and I was going to come and post it on my blog and then writing instructor had other plans... he said ... Send it to BN... so.. that's what I did. I'll send you the link in another post.

Moving on, so October was Cancer awareness month and also the month of my birth... yay!! My birthday this year was really special because I had dinner with my close friends at The Four Points Sheraton and it was dutch! I really don't believe we were able to pull off an all man for himself style dinner in Naija. I mean I had the perfect birthday and i didn't go bankrupt. It was fun and I was really happy. The next weekend I had to go to Ogbomosho for my aunty's wedding. My aunty who is almost 50 was getting married for the first time and it was a really good thing for her. (I'll gist you guys about the wedding in another blog post!!1 plenty tory dey dia! :D)

What else happened in October... hmmm oh yes, a popular radio personality was taking short story entries for Cancer and she was going to post it on her blog. I sent in an entry and I was not shortlisted so I'm going to post it here for you guys to read and enjoy.

I'll be back sooner than you think.

I don’t know how long I sat in the vestry for, but the cup of tea someone had shoved into my hands when we first arrived at the church had turned cold along time ago. I couldn’t explain what I felt, I am not even sure at that time I felt anything. I just felt time pass, and the silence drummed in my ears like a loud gong. I had been asked to prepare to give a short word on Oyinkansola Idowu Cole.
What was I going to say? Where was I going to start from? That the last time I had a real relationship with my mother was when I was 13 That she wasn’t there to talk to me about boys, relationships and clothes?
I stared ahead at the wall ahead of me as if to find an answer to the questions I had been asking for almost 10 years but the cream wall just stared back at me. I remember that day back in J.S.3, Arin’s Mummy told me that I was going home with them because Mummy was not feeling strong enough to come and pick me.
“Your daddy has gone to the hospital with her, but she will be home soon. You will come and stay with us till she is strong enough”
“Can I see her? Can I go to the hospital? I can squeeze some orange juice for her. Mummy likes freshly squeezed orange juice when she has the flu”
I had said this, tongue in cheek, because I assumed my Mum was finally going to have another baby; you know how parents try to deceive kids into believing babies come from hospitals. I was being smart, if the adults could play the ‘flu game’ so could I.
I remember the sad smile on Mrs Kosoko’s face because of my naivety. I laughed out loud as the memory of that day brought a trickle of tears down my face. It was the first time I was crying since the 13th of September when the doctor walked into the waiting room to tell me my mum had passed. Why hadn’t I cried? It wasn’t because I was a cold heartless 22 year-old who didn’t care about her mother. It was because my mother had died over a year ago when she could no longer speak from the wracking pain. The lymphoma has taken a little of her till it took her voice.
"My mother was her voice. Oh how she would sing. I loved waking up on Saturday mornings to hear her raise the rafters with her voice clear as a bell, sweet as the sound of canaries in summer as she sang her favourite song, Amazing Grace.
I was shipped off to boarding house because the strain of taking care of Mom was taking its toll on my father. Every time I came home, my father looked older from caring for her, he was pouring all of his finances into her treatment and she didn’t seem to get better.
I remember coming home and being afraid to enter her room because it smelt of death. Her hugs lost their warmth because she grew weaker. I was afraid of my own mother because she looked so frail; she lost all her hair from the chemotherapy and the radiotherapy. My mother, bless her heart would always call me into her room to chat, to ask about the little details and most importantly she sang to me. There was something in knowing that she would always sing to me and even though she was not strong enough to keep me in check in my wild years as a teenager I would remember the words of her songs and be contrite.
My dad was struggling with the burden too; he would come back from work and sit by her bedside till he fell asleep. I had to grow up fast for her, for him, for me.
The doctor gave her 1 year to live, but my mother was a fighter. The embers of the love she felt for Daddy and I that kept her going. It felt like she wasn’t going to leave until I was old enough to take care of myself. She didn’t give up till 8 years later.
My mother, Oyinkansolami, the canary of my house stopped singing and was being laid to rest today. What was I going to say about a woman so strong and unique? I wept uncontrollably for my loss.
Posted by Eknoreda at 9:30 AM No comments: