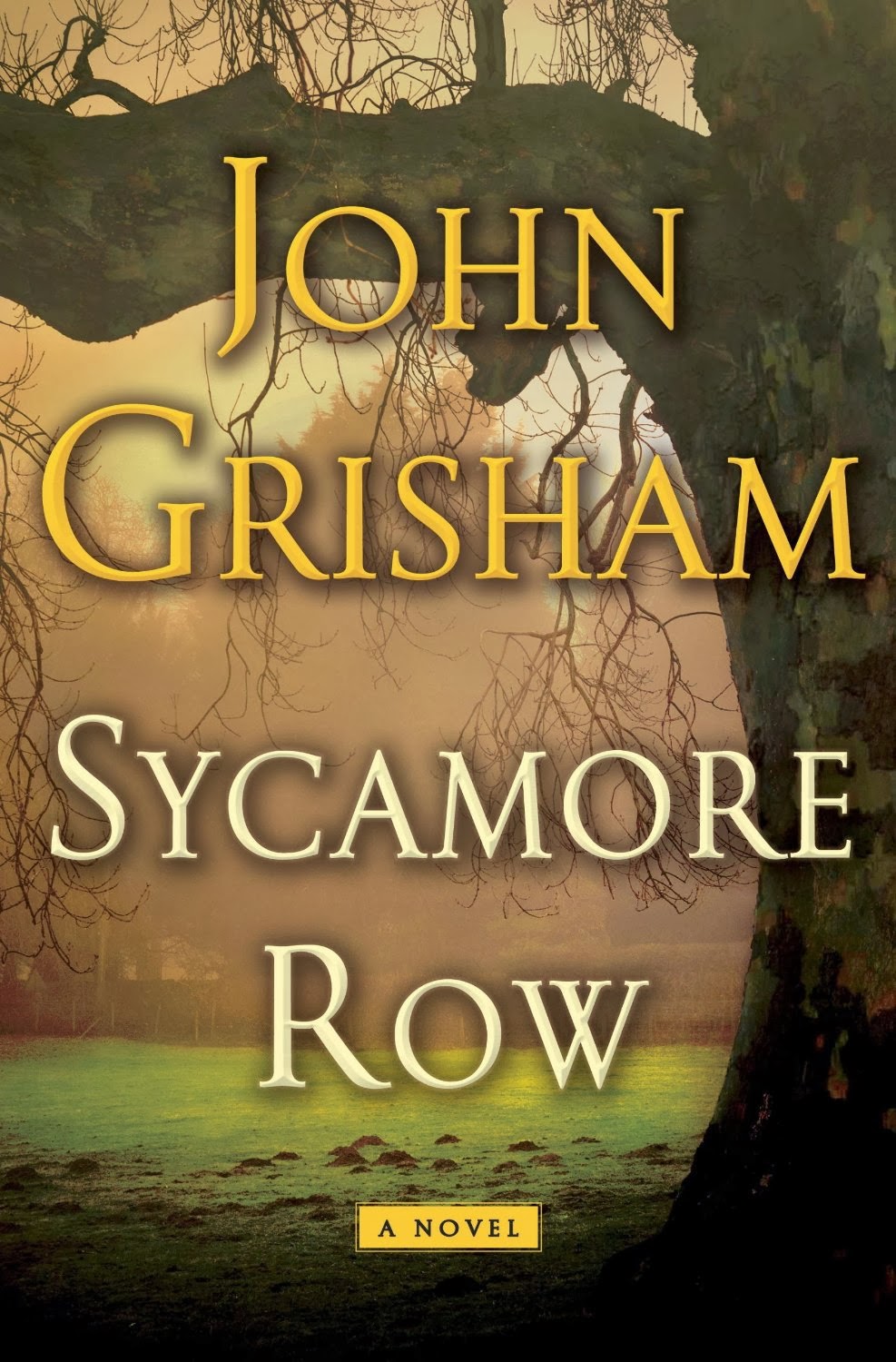 My introduction to John Grisham was through the book Pelican Brief.  As a teenager who dreamt of becoming a lawyer, I was thrilled by his ability to talk about the practice of law while weaving a crafty web of intricate plots and stories. Many years later, and having read quite a number of his titles, it was with great joy and anticipation that I picked up his most recent book, Sycamore Row.
Set in 1988, as a sequel to his first book A Time to Kill, Grisham establishes that he still has the capacity to spin a yarn, decades later. Describing Sycamore Row as a sequel to A Time to Kill is not completely accurate. Especially as the story in the former is not a continuation of the latter. Some of the characters in the earlier story to make an appearance in Sycamore Row but the narratives are markedly different.
Wealthy businessman Seth Hubbard is dying of cancer and carefully orchestrates his own death. The body of the 70 year old is found by one of his employees, hanging from a Sycamore tree.  Being a meticulous planner, he leaves a note which eliminates any suspicion of foul play. He writes a holographic will, which disinherits his children and gives the bulk of his estate to his black housekeeper -- Lettie Lang. Seth also gives 10% of the estate to his church and his long-lost brother, Ancil ­-- in equal proportion. This new will is put in the mail to the office of our hero from A Time to Kill, Jake Brigance.
Seth and Jake have no prior association, but Seth states in his letter that Jake was chosen for the task ahead because of the good work he did with the Carl Lee trial (from “A Time to Kill”). Seth knows that his testamentary document is going to cause uproar. Warning Jake in advance, he writes:  “My estate is substantial – they have no idea of its size – and when this is made known they will attack. Fight them, Mr. Brigance, to the bitter end. We must prevail.”
And with that, Grisham unveils the story and takes us on the journey of finding out just how much Seth is worth and why he has made this unusual bequest to Lettie.
We are re-introduced to characters from the previous book; and while nothing has changed much with respect to their personalities, Grisham manages to use them to build and support the main framework of the story.
Lucien Wilbanks has bursts of insight when he isn’t drowning in alcohol, and together with Harry Rex, (also, a character who struggles with liquor and boundaries) they help with the progression of the story.
There are times when the narrative is long-winded; Grisham takes us on journeys into the lives of certain characters but, he doesn’t fully resolve their position in the plot. He spends a lot of time developing the character of Booker Sistrunk and kicks him out of the book halfway through. There is an attempt to give him  a certain relevance towards the end but it falls short of being effective.
Grisham employs the omniscient point of view style of storytelling. He basks in breaking all the rules as he jumps from the head of one character into that of the next. But, he does it so skillfully that there is no doubt in the mind of the reader about who is thinking what. The fact that Grisham chooses to tell use that tool to weave the tale,  helps with the transitioning of the plot because the reader is constantly moving with the character. This aids the pace of the book a whole lot.
He makes readers fall in love with the intricacies of the law and speaks through his characters, like a true lawyer.
As Carla Brigance asks her husband: “Why in the world do you want to be a trial lawyer?” Grisham, through gives us a glimpse into why every trial lawyer does what he does : “Because I love it. It’s what being a lawyer is about. Being in the courtroom, in front of a jury, is like being in the arena or on the field. The competition is fierce.”
The reader is also shown that like any game being played, the law can be dirty and extremely messy. “Ethics are determined by what they catch you doing. If you don’t get caught, then you haven’t violated any ethics.”
Grisham also dips into the issues of racial division in Mississippi, taking us on a historical trip to a place so horrible that we feel an intense desire never to return to a time so cruel and barbaric.
As Jake strives to ensure that Seth’s wishes are carried out, he has to face the challenge that is posed by the school of sharks representing the interests of the children now disinherited by the holographic will.
Sycamore Row is a great book which is a reflection of the author’s skill at being a legal fiction writer as well as a voice for the obscure Southern lawyer. There are salient issues enumerated in the story but he doesn’t smack the reader over the head with it. Rather, he slowly sheds light towards them in faith that he has passed the message across. His style is such that you will indeed get the message. It is not Grisham’s finest or most interesting work, but it is definitely a page-turner.
Posted by Eknoreda at 10:27 AM No comments: